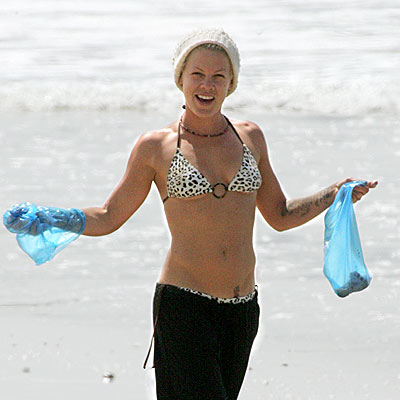 Eeeeow! Pink is caught holding the bag — of puppy poop, no less — while taking her dogs on a walk in Malibu. At least she’s a responsible owner. But we hope that’s sand on her arm!

25-year-old Britney Spears &Â 2-year-old sonÂ Sean PrestonÂ were spotted Wednesday checking out the pooches at Pets of Bel Air in the Glen Centre shopping mall.Â  After spending quiteÂ a bit of timeÂ picking out the lucky pup, Spears & Preston chose an Apple Head Chihuahua at a measly cost of $3,200.Â

The new addition to the Spears clan has been named Snow White, who would have joined fellow Chihuahuas Lucky & Bit Bit as well as the Maltese named Lacy, had they not mysteriously disappeared while she was married to Kevin Federline.Â  Hopefully Snow White will be sticking around for a while.

Thanks to Us Weekly for the images.