I can name that tune inâ€¦ one note. Former Baywatch babe Pamela Anderson is adding another talent to her resume: singer.

The 42-year-old is launching her pop career with the debut of her single, â€œHigh.â€ This collaboration with her designer friend Richie Rich is supposedly a song about fashion. â€œWe are recording a pop single together,â€ he told Page Six. The single is expected to hit the stores by New Year.

Exactly how much of her vocal prowess should we expect? â€œPam says she wants to sing, but nothing too difficult, so sheâ€™s just going to sing the word â€˜highâ€™ over and over,â€ Rich said. Hey, even her 11-year-old son can do that.

Perhaps we should focus on Pamâ€™s other feats. She and Rich are working on their clothing line called A*Muse, which will debut at the New York Fashion Week in February 2010. Her ex-husband Tommy Lee is helping out by DJ-ing for the show, while Anderson herself is modeling the threads.

We wonder if DJ Lee is spinning â€œHighâ€ into the mix? 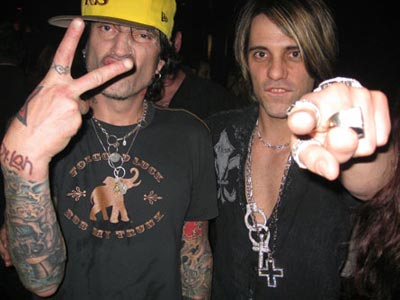 After Tommy LeeÂ went &Â got himself bitch-slapped by none other than Kid Rock at MTV’s Video Music Awards, he decided to do some blogging about the incident.Â  Here ya go:

Yeah!! …..here I am minding my own biz having a great time with my friend Criss Angel (magician) and watching the MTV awards in the front row saying hello to all my friends……Pamela comes and sits on my lap who I love and adore….and also say hello to my friend Travis Barker and his wife!…..and i get a text from another friend P. Diddy and he says come sit with me…..and he’s sitting with Miss HOT Megan FOX so I go over and sit with P! Not a minute later and Alicia Keys starts her amazing performance….(“I apologize sweetie…..I had nothing to do with the timing and disrespect”)……back to the stupid-ness!!….so….. I get a tap on the shoulder from Kid Pebble…I stand up and embrace him with a semi hug and say “Hey dude…What up”?? He punches me in the face…..well if ya wanna call it that!?….more like a bitch slap!…….Wuss!! Anyway….i go to knock this jealous country bumpkin the f$%k OUT….and before I can have a meeting with my fist and his ugly ass mug ….security guards… grab me and haul my ass outta the award show! So I’m fine and of course leave to my room with police and owner of the Palm’s George Maloof……the rest is paper work and bullshit!… Anyway…… I would like to apologize to Alicia and George and MTV for the disrespectful bullshit caused by a piece of shit called Kid Pebble!!

Wow, those crazy boys.Â  I’ve forgotten, when do rockers grow up again?

“I don’t have a boyfriend at the moment.”

“Tommy is, honestly, just a friend. I don’t have any time to see anyone right now.” 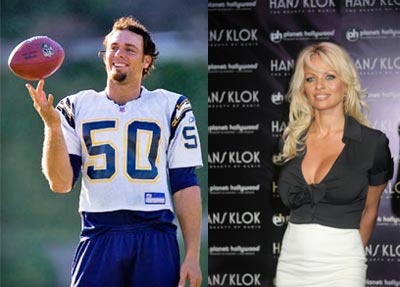 Anderson has been dating the San Diego Chargers football star for a while now & Pam says he’s a real man, saying,Â “That’s exactly how I want my man to be – very strong, very calm. I’m such a crazy person, so emotional, and with Dave I can relax.

“What I hate nowadays is that so many guys are becoming like girls – they’re not cool any more!” 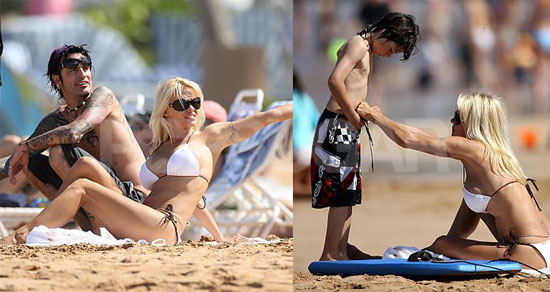 Seeing these two on the beach again brings back memories of old.Â  Here’s hoping the happy couple can give it one more successful go.