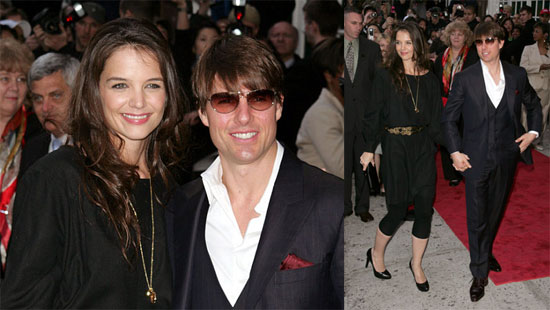 Sweetiepie Katie Holmes has recently taken a break from her crazypants man Tom Cruise & begun filming a movie, about damn time if you ask me.

Holmes met back up with Cruise in New York City earlier this week for a private dinner that was aiming to raise money for a “Detoxification Project”.Â  The project, as it were, is based on the principles of Scientology & will offer free treatment to workers who suffer breathing problems due to toxin exposure at Ground Zero.

Sounds like Tom has a soft spot, or does he?Â  I have a sneaking suspicion that this so-called “Detoxification Project” is just a cover for more spreading of the so-called religion Scientology & that really and truly TomKat are aliens at heart.Â  I’m really just taking a shot in the dark on this one, but if the Enquirer can do it, so can we.

It looks like overprotective hubby Tom Cruise actually letÂ Katie Holmes out of the house for a spell.Â  TomKat, along with baby Suri, were spotted at adoptedÂ son Conner’s basketball game at Beverly Hills High School.
Â
Katie looks like she’s trying to make a Yoko Ono face, Suri is working it for the gentleman in front of her & Tom is probably thinking about how best to convert everyone to Scientology.Â  All in all, a normal TomKat outing I would say.

You know, if theseÂ pregnancy rumors are true thenÂ football quarterback Tom Brady has one potent sperm bank in there.

With Tom’s ex-girlfriend Bridget Moynahan already four months pregnant with a Tom Brady superbaby, it also looks like new girlfriend Gisele BundchenÂ might have the same luck as well.

The rumor on the street is that after the new couple of Brady & Bundchen found out they were pregs as well, the duo decided to go on a European vacation through Rome, Milan & Paris before heading out to Brazil last week to meet the Victoria’s Secret model’s parents.Â  Actually, that does sound kinda heavy, meeting the parents & all.

Reps for not Brady & Bundchen have said they will not comment on the matter.Â  Ooo lala, sounds like Brady’s a sure bet in at least one department! 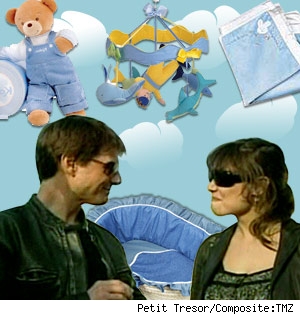 I’m fairly certain this news has to be bunk, but according to TMZ Tom Cruise & Katie Holmes might be expanding their family sometime soon, or maybe they’re just hopingÂ for an L.Â Ron Hubbard reincarnation to occur.Â  Who knows with these damnÂ Scientologists?

The team TomKat pal was overheard saying, “We want to be prepared for a baby boy.”

The themes the insider walked away with were sports, nursery rhymes, cartoonÂ &Â the color blue.Â  Kinda boring if you ask me.Â

ReportedlyÂ Â Petit Tresor was given a deadline of April 15, justÂ three days before babyÂ Suri’s first birthday, to come up with the respective designs for each scenario.Â  Truly odd indeed.Â  Maybe Cruise & Holmes are just going on a VietnameseÂ shopping trip soon & plan to pick up a baby on the way home, Jolie-Pitt style.

Wow, right?Â  How awkward can two Scientologists be, eh?Â  The whole time I wasÂ watching this hilarious video, my inside self said, “Look away!Â  Look away!”

This fabulous footage was taken at the Market America pre-Super Bowl party which besides featuring TomKat getting their freak on, also featured performances by pals Marc Anthony & Jennifer Lopez.Â

It is rumored by Hollyscoop that TomKat even started “dancing on tables” & “freaking each other” while the likes ofÂ Â Nick Lachey, Vanessa Minnillo, Fergie, Josh Duhamel, Andy Roddick, Kid Rock, Matt Leinhart, Scarlett Johansson, John Legend, Maria Menounos & Jeremy Piven just looked on.Â  So maybe that’s what was going on in that picture with Nick, Vanessa & Fergie.Â  It make so much more sense now!

Silly TomKat, don’t you know that freaking just isn’t fit for white people like you, especially in public?!