Lively, 25, and Reynolds, 35, surprised fans when they wed in early September. Surprisingly, the couple was able to keep their engagement and subsequent wedding a secret, even from the paparazzi. The two first met when filming the movie Green Lantern in 2011, but they didnt actually start dating until later that year, and only after Reynolds had finalized his divorce with Scarlett Johansen. Lively is most well known for her role on the popular TV show Gossip Girl, while Reynolds has starred in television shows and numerous films, including National Lampoons Van Wilder and Blade Trinity. END_OF_DOCUMENT_TOKEN_TO_BE_REPLACED

The “Sexiest Man Alive” is apparently still hurting over his divorce from his 2-year marriage to now ex-wife Scarlett Johannson.  Ryan Reynolds says he still needs time to heal to this day after their divorce last December.

In an interview, the 34 year old actor, who we want to see in funny T-shirts admits he’s still not out of the mud yet but holds a lot of optimism for the future.  Although he seems to be going through a lot of pain, just like anyone who goes through a divorce. Reynolds say, eventually  you come out of it.

The Green Lantern actor muses that he may no longer want to get married again. Speaking on his emotional stand at this point, Reynolds says he is now a different person than he was six months ago. He has been spotted getting friendly with German model Agnes Fischer while filming his new movie Safe House in South Africa. When asked about this, he quickly quips that he is very happy not be in a relationship right now and finds dating to be somewhat of an alien thing to him at this point in his life.

In spite of his refusal to discuss any specific matters regarding his Scarlett Johansson, he proudly speaks of  how they managed to end their marriage and still maintain the idea that she is still the same person he married.

Still the reigning “Sexiest Man Alive” , Ryan Reynolds is concentrating on his current project “Safe House” where he prouds himself with death defying stunts and intense emotional scenes.

END_OF_DOCUMENT_TOKEN_TO_BE_REPLACED

Ryan Reynolds proves that he’s not only a winner by hooking Scarlett Johansson, he can also run the marathon. Reynolds was able to complete the ING New York City Marathon in 3 hours and 50 minutes. 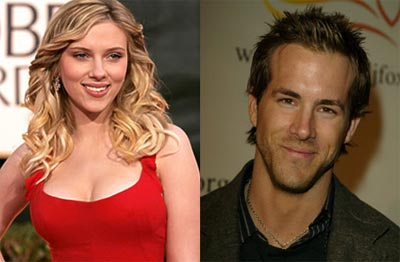 Sexy little thing ScarlettÂ Johansson & Ryan Reynolds have beenÂ linked together for some time now, except the hot item has managed to stay clear of the paparazzi pretty darn well.Â

But it looks like the insiders are starting to open up as the couple were spotted getting cozy at Troubadour Monday night.

According to a source the two were quite quick to find each other even though they arrived at the club separately, saying, “In the foyer they were talking and had their hands all over each other.”

“He kissed her a couple more times in the club. He was totally sweet. She went to the restroom and he went to check up on her.”