Rosie announced her break from blogging some time back and she has pretty much stuck to her word. She has made an exception for British singing sensation Susan Boyle, however. Why not? Everyone’s talking about her, Rosie couldn’t very well not join the fray, right?

What does she have to say?

“”Here’s a woman who, at my age — 47, was perfectly content to live in a little village in Scotland and sing in a pub, and then she came and did this and two hundred million people saw her,” Rosie told Access Hollywood. “That’s like being hit by a tidal wave. We will never see the Susan Boyle that we saw that night again! That’s done. It’s been washed away.”

It’s not the first time that she has done it but at the start of 2009, Rosie O’Donnell says in her blog:

this year
unplugged
see what happens
on we go

peace out
and in ”

Followers of the celebrity are surely going to miss her haikus. Others simply wouldn’t notice.

Rachael Ray, the queen of cooking talk show television told the crowd during a charity event hosted by Rosie O’Donnell. Despite the grim news, Rachael characteristically stayed upbeat as she candidly spoke about her upcoming throat surgery.

“I’m having voice surgery on Dec. 16, so we’re going to celebrate very quietly……It’s fine, it’s just a little bump, I need to get rid of it though.”

Ray explained, continuing to joke on how she planned to write on a pad of paper to communicate, saying that she was going to “grow back the callous” that she had in grade school.

In October, Rachael’s reps told the press that the cooking star had found a small lump in her throat and had to have it removed. They said it WASN”T throat cancer. Phew. 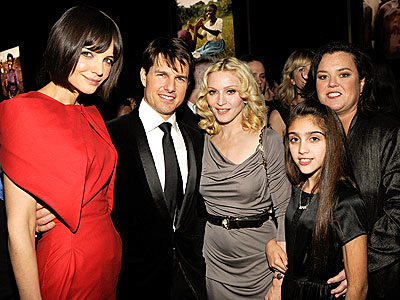 Enough with the sad Hollywood tales of drug overdoses and nervous breakdowns.

Let’s look at the glamorous and fun side of the celebrity scene — and no one does glamour better than these people. Madonna (remember when we thought she was a bad girl? she looks lke Mother Teresa compared to Britney) threw a star studded benefit for UNICEF, co-sponsored by Gucci. Next to here are the power couple Tom Cruise and Katie Holmes, and Madonna’s now 11 year old daughter, Lourdes. Rosie O’Donnell’s there, too — though she won’t be touching the alcohol; she says she’s quit drinking.

None other that comedian Whoopi Goldberg will be replacing washed up celeb Rosie O’Donnell on “The View” this fall.Â  Good ole Barbara Walters made the announcement on the morning talk show on Wednesday, to many cheers & applause.

Walters told the crowd, â€œI have known Whoopi for years. She is brilliant, funny and irrepressible, and is an enormously popular and talented star.”

â€œThis is going to be a great new chapter for The View.â€

WhoopiÂ has been a guest on the TV talk show several times before & will be making her moderator debut September 4, at the start of the eleventh season.Â  Jeez, has it really been that long?!

Goldberg said she is looking forward to the task, saying, â€œIâ€™m really glad to be doing The View.”

Looking forward to seeing Whoopi back in action!