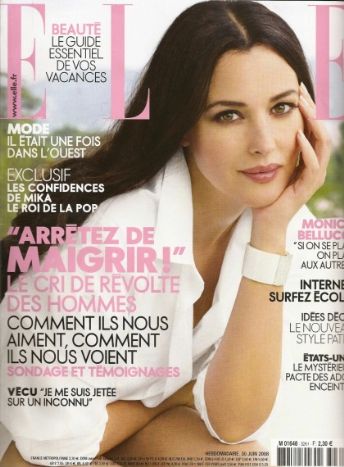 Bellucci was born in Città di Castello, Umbria, Italy, the daughter of Maria Gustinelli, a painter, and Luigi Bellucci, who owned a trucking company. Bellucci started modelling at 16, when she was attending the Liceo classico. Initially pursuing a career as a lawyer, Bellucci modeled to pay her tuition at the University of Perugia, but the lifestyle tempted her away from her law studies. She speaks Italian, French, and English fluently, Spanish semi-fluently, and she has had speaking roles in each of these languages as well as in Aramaic for her part as Mary Magdalene in The Passion of the Christ.

I blatantly quoted (aka stole) this content from Wikipedia not because I couldn’t think of anything to say about Monica, but because I know a little secret about her that you might not know. She is going to finally turn into a beautiful women in the year 2010. You see, I know everyone in the world has been waiting for the day she would turn beautiful and with her being 45 years old, the world has been waiting a very long time.

However, the wait is over very soon because next year it will happen. I expect it to be a spectacle like no other, greater than the Olympics. It won’t be as great as the day that I lose my virginity though which will happen next year as well, the day before Monica turns beautiful. I’ll be damned if she ever outshines me. She doesn’t have it like I do.