At the Paris Rock En Seine Festival last August 28, British rock band Oasis pulled out just before they were due to perform on stage. Bloc Partyâ€™s Kele Okereke, one of Oasisâ€™ longtime enemies, announced the latter bandâ€™s split onstage. Okereke referred to the bandâ€™s lead members Liam and Noel Gallagher as â€œinbred twins.â€

Later after the show, Noel posted this statement on oasisinet.com: â€œItâ€™s with some sadness and great relief to tell you that I quit Oasis tonight,â€ he wrote. â€œPeople will write and say what they like, but I simply could not go on working with Liam a day longer.â€

The siblings have been bickering since the bandâ€™s peak in the â€™90s, and their brotherly brawls have actually contributed to their rise in popularity. Scuffles, heckling, and even violent fits were common between Liam and Noel both on- and off-stage.

Reports of splits and reconciliations continued throughout the late â€™90s, causing a strain to their performances and productions. The bandâ€™s popularity got back on track in 2005 with chart-topping hits and a large-scale world tour.

A few days ago, Liam and Noelâ€™s mom Peggy Gallagher gave Oasis fans something to hope for when she told the Sunday Mirror: â€œThey do love each other, but theyâ€™ve always been very different. The funny thing is, they didnâ€™t fight as children. They didnâ€™t fight until they started the band. I hope this isnâ€™t the end of Oasis. I donâ€™t think it is. Theyâ€™re just tired at the end of the tour. Theyâ€™ve had fights before and got over it.â€

Do you believe itâ€™s just another one of the infamous Liam-Noel rifts that will eventually lead back to reconciliation? Do you think do you think the band can continue their career without Noel? 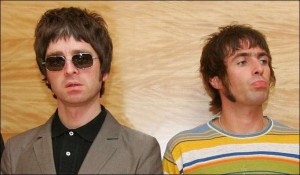 Noel and Liam Gallagher have always been at each others throats, but this time, things seem to be more serious. Noel has left the band, supposedly due to “verbal intimidation.”

He wrote: “the level of verbal and violent intimidation towards me, my family, friends and comrades has become intolerable.”

He also said that he cannot work with brother Liam a day longer. Is this really the end for Britpop sensation Oasis?