From what I have read and seen in Disney movies, it can be hard being the ugly adopted child in the family so I’m not trying to rag on Khloe too much here, but feel it needs to be done. Wait a second, my agent is trying to tell me something. What?! She isn’t adopted? You mean she comes from the exact same family as Kim and Kourtney? Wow, well then she just got crapped on when it comes to the genes. I would love to see the family tree to see who she resembles because I am at a loss here.

Here’s the thing though. If you aren’t the best looking of the bunch you have to play your cards right and find other ways to be sexy. You can’t outsexy your sisters by wearing the same outfits that they would wear or act out in the same manner. No, you have to find your own niche, but she doesn’t do that. She tries to outperform Kim by being a better Kim, but she is a worse Kim. She just needs to be a better Khloe.

Kourtney has the right idea, but maybe that is because she is the oldest, which still boggles my mind. She looks as though she should be the youngest, but that is cool with me. Khloe married an athlete after Kim had been dating Reggie Bush forever. You know she did the quick shotgun marriage just to upstage Kim, but people aren’t going to remember that wedding for long and you know if Reggie proposes to Kim that event will be bigger than Khloe’s wedding.

She has to differentiate herself and she isn’t going to do it by her looks or actions. Well if she can’t do it that way then I guess she can’t do it any other way. Whoops. 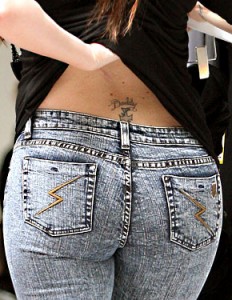 I love what she said about tatts and Bentleys! Apparently, sister Kim has been kidding her about her ink and said that you don’t “put bumper stickers on a Bentley.” To that, Khloe replied, “I guess I am not a Bentley!”

She has several tattoos, most of them she is proud of. She does regret, however, her “tramp stamp” on her lower back. She says the location could have been better. I’m still stuck on the Bentley comeback. 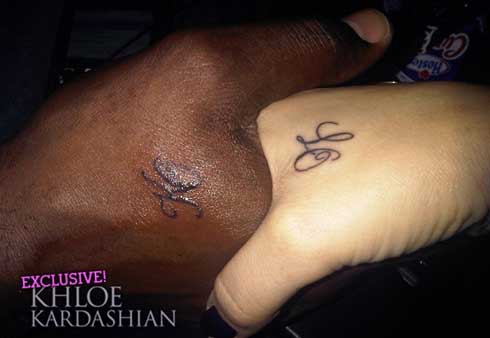 Technically, Khloe is still a Kardashian and not an Odom, but the couple have gotten matching tattoos to signify their union. In the picture shown by TMZ, you can see their initials on their hands. What do you think, is it sweet or overrated? 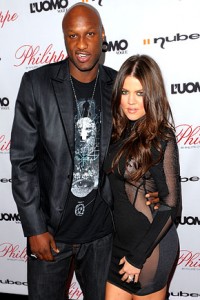 Tabloids say that newlyweds Khloe and Lamar have split. The reason? Lamar (allegedly) refused to give her a massage.

Khloe’s reaction? That’s hilarious. She says she has never been this happy. Good for her!