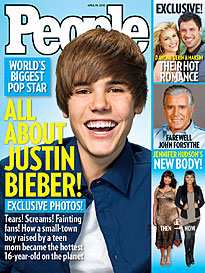 Want a sure-fire way to sell your magazine these days? Get a few minutes with Justin Bieber. People is the latest magazine to do a story on the teen sensation, and this time they went all the way by making him their cover boy.

For this week’s issue, the title “All About Justin Bieber” says it all. Writer Joey Bartolomeo’s story tries to make sense of “how Justin Bieber grew from YouTube sensation to the biggest pop star on the planet—all by the time he hit 16!”

For non-gushing teens and tweens, there are other stories worthy of your attention. There’s the one on Jennifer Hudson, spokesperson of Weight Watchers, and how she managed to trim down to a size smaller than her pre-baby weight. There’s an article on country singer Kenny Chesney and his year off the entertainment ‘biz. Then there’s a sexy photo shoot and interview with Dancing With The Stars couple Maksim Chmerkovskiy and Erin Andrews.

Kenny Chesney has finally come out of hiding after the controversial annulment of his marriage to Renee Zellweger. Rumors have been going around that the reason was that, let’s say, he leans towards the same sex. In a recent interview, he vehemently denies this and cites a specific number of girls that he has been with throughout his life. So yeah, he’s not gay. 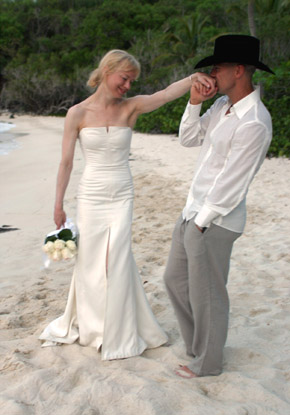 In an interview with “60 Minutes” Chesney denied & denied & denied rumors about the reason for annulment of his four-month marriage to Renee Zellweger.Â  Ever since the couple split in September 2005, rumors have circulated that Kenny was in fact gay.Â  When Renee filed for the marriage annulment, she actually cited “fraud” as the reason for the break-up, giving many to believe the cowboy swings in the male direction of things.

“Maybe I should have come out and said no, I’m not (gay), but I didn’t want to draw any more attention to it â€¦ I didn’t have to prove to anybody that I wasn’t (gay) â€¦ I didn’t feel like I really did.”

Chesney went on to try & explain why Zellweger had chosen the word “fraud” in the annulment paperwork.Â  The country singer said they chose this word due to its ambiguity.

“We thought was the least harmful was fraud ’cause it’s kind of broad, whatever it is. Doesn’t specify. And, boy, didn’t, we were wrong. But, it’s okay. The only fraud that was committed was me thinking that I knew what it was like. That I really understood what it was like to be married, and I really didn’t,” Chesney stated.

Interestingly, Kenny said he does not regret the short marriage to Renee Zellweger & is in fact looking forward to having a husband wife & children one day.