As TomKat split over the weekend, the Hollywood saga will continue in court as the top celebrity divorce lawyers are called into action.

The female half of TomKat is going to be seen at the SAG Awards as a presenter for an acting category. She will be joining a lot of other celebrities who will be presenting awards as well. No mention of her hubby, I think.

Tom Cruise seems to want to beat Brangelina at their own game. He is reported to have said that if he had his way, he’d have a bunch of 10 little TomKats running around. And what does Katie Holmes have to say about this? No word on that yet.

Katie Holmes‘ Broadway debut in the play All My Sons got mixed reviews from critics. The Daily News had a very good review for her portrayal of Ann but The New York Times had a harsher verdict, saying that she was not believable.

Either way, Katie got the support of hubby Tom Cruise as he was in the audience during the opening of the play. 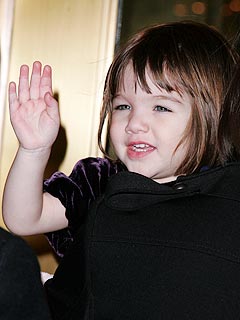 Happy Birthday Suri! Katie Holmes and Tom Cruise’s darling celebrates another birthday, with an adorable cake and loads of presents.