According to Celebitchy,Â blonde due Kate Hudson & Owen Wilson may be on some shaky ground.

Even though the couple have been spotted recently out in the public’s eye in Australia where Hudson is still filming for Foolâ€™s Gold with Matthew McConaughey, the blondes may have hit a patch of trouble.

Â Here’s the scoop from In Touch:

“Just when it seemed as if if Kate Hudson and Owen Wilson were getting serious, things have started to fall apart, and insiders are blaming Owen. Over the past few weeks, the 38-year-old has been seen out with an ex in LA, participated in a seedy bar brawl with longtime pal Woody Harrelson and went on a jaunt to Hawaii – without Kate.

According to insiders, Kate, 27, has found a strong shoulder to cry on: Matthew McConaugheyâ€™s. Kateâ€™s troublesome romance has drawn her and Matthew, 37, together.”

Blonde on blonde action all the same!Â  I’m not sure who I would prefer Kate to settle with, though I’m still not betting it would be one of these shaggies. 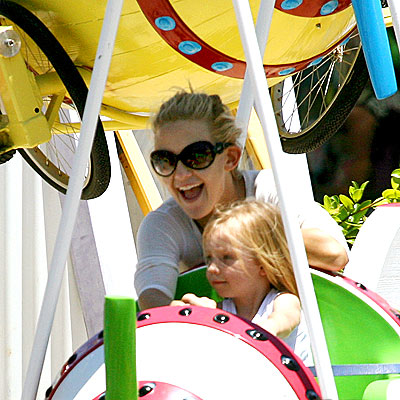 Taking aÂ day off from filming Fool’s Gold in Australia, Kate Hudson tookÂ her cute 3-year-old son Ryder out for a date.

The adorable duo hit Queensland’s Sea World theme park on Sunday & it looks like they had enough fun for all of us.Â  I just can’t help it, kids.Â  Kate Hudson is just the bee’s knees & that son Ryder of hers is just too sweet!