That’s how she describes herself now that she is a mommy. She cried when she had to work out to lose weight for her Campari calendar shoot. She cries whenever she sees her baby on the web cam – she’s away for the shoot. But hey, her calendar photos are worth the tears. Check them out here.

Who said she was? Apparently, everyone thought she was when she told a reporter during the Obama inauguration “Be neutral about it – be Sweden.” You mean Switzerland? Yeah, that too.

Seriously, though, everyone makes mistakes sometimes. And they both start with S, it’s easy to confuse them. It doesn’t mean you’re stupid, does it?

Who could forget Britney Spears’ boo-boos years ago with her tots? It seems that Jessica Alba might be a strong candidate for similar things – she nearly dropped her daughter while holding her in one arm. But hey, I think she tripped and we’re all entitled to our mistakes. right? Everyone’s fine by the way.

Months after her wedding, Jessica Alba finally got her wedding reception. The star got married to sweetheart Cash Warren seven months ago and held a formal reception Friday in Beverly Hills. Another star of the night was their daughter Honor, who is 6 months old. 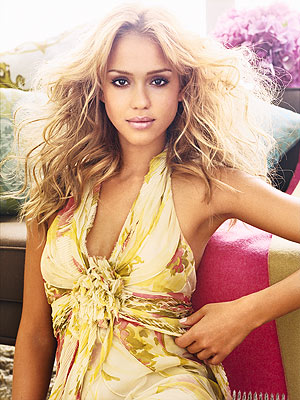 Geez, Jessica, we got your point the first time.

Jessica Alba does another controversial ad for the Declare Yourself campaign, which encourages people to vote.

On the other hand, it’ll also make an interesting photo for a Playboy bondage story.