The Trump has said it again “You’re fired!” This time, it’s in real life. He fired Carrie Prejean as Miss California, for being unable to carry out the commitments the title entails.

Remember when the real estate mogul called Rosie O’Donnell some fugly names? In Jessica Simpson’s case, he seems to be having a change of heart when it comes to women’s sizes. He has been quoted as saying “I think Jessica Simpson looks great. Don’t change Jessica. You look great!” I wonder how heartfelt this statement was?

After the success of the (original) Apprentice, followed by the L.A. then Martha stint which failed to get the ratings back up again, Mark Burnett and The Donald have now teamed up again for another version of the show, this time with ” Celebrities” (some of whom you may know, others not) and with the money going to charity. The new show premiered Thursday to mixed reviews. 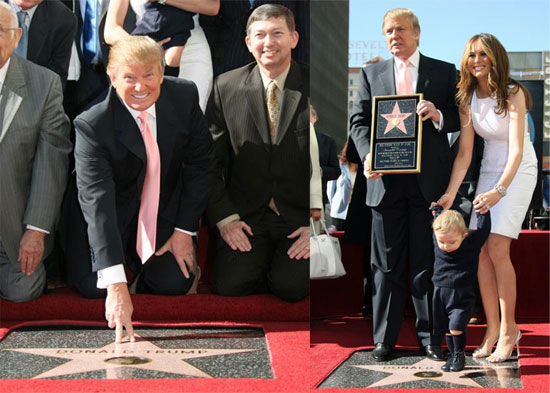 What do you know about that? Donald Trump has been awarded his very own Hollywood Walk of Fame star, now how much did that one cost him? ‘Trump will find a way’, should be ole Donald’s slogan. I bet this is just the thing to get the Trumpster going on Rosie O’Donnell again.

During his ceremony speech Tuesday, Donnie said this has been “a special moment in his life.”

Trump also took time to say his son Barron is basically the shit, saying, “He’s strong, he’s smart, he’s tough, he’s vicious, he’s violent â€” all of the ingredients you need to be an entrepreneur.”

Wow, now that’s not a lot of pressure to put on a toddler, is it? Melania looks gorgeous as usual, even if more than half of her is more fake than Tara Reid’s breasts.

You tell me- Does Donald Trump deserve his own Hollywood Walk of Fame star? 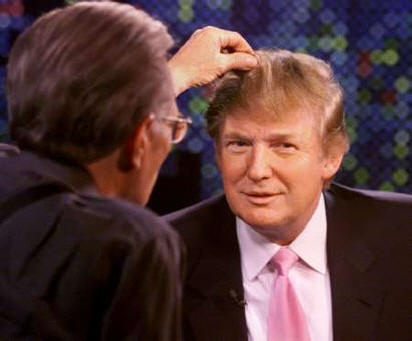 â€œWhat separates the winners from the losers is how a person reacts to each new twist of fate.â€