What started out as a holiday dinner party turned into a heated argument between Charlie Sheen and his wife Brooke Mueller.

According to People, both were drinking and arguing at a friend’s house in Aspen when things got out of hand. The fight continued until the next morning, so the 44-year-old actor was arrested for second-degree assault, menacing, and criminal mischief.

“Carlos Irwin Estevez, also known as the actor Charles I. Sheen, was brought to the Pitkin County Colorado Jail for booking and incarceration following his arrest by the Aspen Police Department,” Pitkin County Sheriffs Office patrol director Jeff Lumsden said in a statement.

Charlie was taken to prison at 11:20 a.m. on Christmas day, and was released at 7 p.m. after posting an $8,500 bond. The couple will reportedly be undergoing counseling to patch things up, while Charlie will enroll in anger management classes.

Whether or not their 9-month-old twins Bob and Max witnessed their parents’ scuffle, they are too young to remember the incident—or their first Christmas, for that matter.

Charlie Sheen and Brooke Mueller welcomed their baby twin boys to the world on Saturday. Bob and Max are the first children of the couple together. Congratulations!

Brooke, Charlie Sheen’s current wife, has been rushed to the hospital due to premature contractions. She is pregnant with twins and doctors say that contractions are common at this stage. She is doing fine and will probably be a mom to two babies pretty soon!

I love celebs, but I’ll tell you, someÂ of ’em are taking crazy pills or something.Â  Apparently Charlie Sheen is taking his historicÂ divorce battle with ex-wife Denise Richards to theÂ press.Â

Sheen just recently revealed, in a bizarre turn of events, that Richards hadÂ askedÂ good ole Charlie boy for some of his sperm as he wasÂ walking out the door on the marriage.Â

Allegedly Denise wanted more children with Charlie as the father.Â  And according to the man himself,Â these allegationsÂ “are true. There is documentation that I’ll show in court revealing the request for my ‘donation.'”

So, will Charlie step up to the sperm plate, as it were?Â  “I would sooner walk on the surface of the moon in exactly what I’m wearing.” 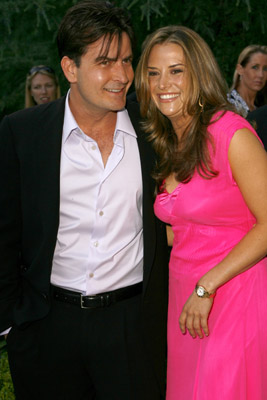 Actor Charlie Sheen is getting backÂ into the trickyÂ bed of marriage, once again.

The couple first stepped into the spotlight back in June 2006 for the Chrysalis Butterfly Ball in Los Angeles & have been together ever since.Â  Maybe she likes a bit of crazy in her life….

Apparently, Sheen popped the question to Brooke on a Costa Rica beach with none other than a $500,000 engagement ring.Â  Well, that might bring a ‘yes’ to any girl’s lips.

Let’s just hope that this marriage is ten times better than that Denise Richards one!