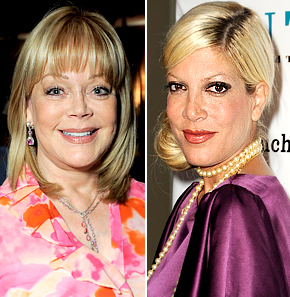 Candy Spelling and daughter Tori have been at odds a lot and recently, mommy blasted daughter for using the kids in a reality show. As things turn out, Candy is getting her own TV show. It’s all hush hush though – no details yet.

Tori’s mom, Candy SpellingÂ &Â none other than jail bird herself, Patty Hearst, have piped in to give Paris Hilton their two cents.

As someone who has known you for most of your life, I pay special attention to your press coverage. (Apparently, I’m not alone, based on the responses every word about you creates on TMZ.com and elsewhere.)

Paris, I’m very worried about you. The last week has not only been an obvious roller-coaster for you emotionally, but your strategy went from blaming employees and stating silly excuses like, “I don’t read,” to your new lawyer’s tactic to have you sound mature and take some responsibility. In between, the paparazzi continue to follow you shopping and taking self-defense classes (to protect yourself in jail?), and some over-zealous friends staged embarrassing protests (three people?), and wasted taxpayer funds with a petition to pardon you.

People who are rich and famous are not treated like “regular” people, even though you claim to now be just like everyone else. In most situations, your privileged life works to your benefit. You have opportunities, access and resources like few others; and frankly, you can get away with more bad behavior and excuses than most people could even imagine. However, as the real possibility of jail approaches — whether it’s 21 days or 45 or whatever the latest report is — it’s time to get real. It’s time to find “a Paris” somewhere between “heiress” and a character on “The Simple Life.” I know she’s there, and I know she can be a good citizen and maturely face consequences other people would have to face under the same circumstances.

I am sorry you have been sentenced to jail. I can’t think of too much that would be worse. But since you let this happen, use the next couple of weeks preparing not only by publicly learning to fight (not a good message to fellow inmates), but by looking around, realizing that you are not as truly entitled as your money implies. You are a young woman who can add more to her community than establishing new definitions for infamy.

And even icon Patty Hearst decided to let her thoughts be known, writing,

Imagine my surprise upon learning of the “advice” I had been giving Paris Hilton. In spite of reports to the contrary, I can assure you that I have not had any contact with Paris (or any member of her family) regarding her upcoming jail time, or any other matter. Like Governor Schwarzenegger, I have had many more important things to think about.

However, since I’m thinking about it now, I must say that my heart goes out to the inmates of the Century Regional Detention Center. Forty-five days with Paris Hilton and the attendant publicity seems like cruel and unusual punishment to me. Perhaps THEY should be petitioning the Governor for relief?

OK, that wasn’t nice. But seriously, if Paris really wants my advice it’s this: Read Candy Spelling’s letter several times and take her advice to heart.

I dig what Patty says the most, maybe the future inmates of Paris should be petitioning the state of California!