END_OF_DOCUMENT_TOKEN_TO_BE_REPLACED

The late actress’ final movie will be released this summer, US Weekly reported.

END_OF_DOCUMENT_TOKEN_TO_BE_REPLACED

What a way to spend the holidays. Actress Brittany Murphy was laid to rest at Forest Lawn Memorial Park in Los Angeles on Christmas Eve.

The 32-year-old died of cardiac arrest in her husband Simon Monjack’s home last Sunday morning. Her mother Sharon found her unconscious in the shower and dialed 911. Medics were unable to revive her and she was pronounced dead at Cedars Sinai Medical Center.

Her family is still waiting for the results of the autopsy performed last Monday. In true Hollywood fashion, cynics are suspecting drug overdose, but let’s wait for the official results in a few weeks, shall we?

In the private ceremony, friends and relatives recited the Kaddish, a traditional Jewish prayer, while the hymn “Amazing Grace” was sung. “The service was very nice; very respectful,” said Alex Ben Block, a representative for the Murphy family.

Her estranged father, Angelo Bertolotti, refused to attend the service because he didn’t want it to be his final memory of his daughter.

After her family announced her death last Sunday, an outpour of celebrity tweets filled cyberspace.

Ex-boyfriend Ashton Kutcher tweeted: “2day the world lost a little piece of sunshine. My deepest condolences go out 2 Brittany’s family, her husband, & her amazing mother Sharon… see you on the other side kid.”

Celebrity blogger Perez Hilton wrote: “Hollywood loses another bright soul… how many more? A decade of decadence and devastation. Time to wake up.”

Singer Jessica Simpson tweeted: “Brittany Murphy was an incredible ray of Light to so many people. Her smile was contagious. My prayers are with her family and loved ones.”

If you are a celebrity and you die at a young age, the words “died of natural causes” just don’t appear. For this reason you can’t blame the media and public questioning how Brittany Murphy could die at such a young age. Her husband however is not too pleased with this type of questioning.

“My wife did not take anything on the morning of her death that would have caused her to be sick or ill, let alone die. It’s beyond even the sickest speculation,” he told the Daily News.

I hate to be a cynic because I am a nudist, but you have to wonder what really did happen with her. Do you believe him or was he just that unaware of what his wife was doing? Maybe he slipped her the poisonous kool-aid and I would hate to think that is the case.

I hope this gets resolved quickly so we can focus on what a wonderful life she had instead of focusing on the gossip behind her death. I’ll keep all of you updated as I hear more, but I’m not too sure anyone wishes to call me. I don’t accept collect call charges. 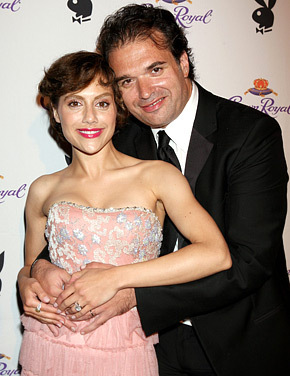 Back when we reported that Brittany Murphy had secretly married Simon MonjackÂ inÂ April,Â several readers responded that Murphy had better watch out, that ole Simon spelled trouble for the starlet.

And you were right, readers,Â asÂ usual.Â  Murphy & Factory Girl producer & writerÂ Monjack surprised everyone by announcing they had married in April afterÂ only a few months of dating.Â  The duoÂ exchanged rings atÂ a privateÂ LA home with only their families present, and didn’t even opt for a honeymoon.Â Â

According to reports, Monjack may not be what he first appeared to be to innocent Murphy.Â Â With two outstanding warrants for his arrest in Virginia, for credit card theftÂ & general fraud; an unpaid $6k legal bill as well as a $500k judgement against him by a British investmentÂ firm, this sounds more likeÂ an Oprah book than aÂ Hollywood marriage.