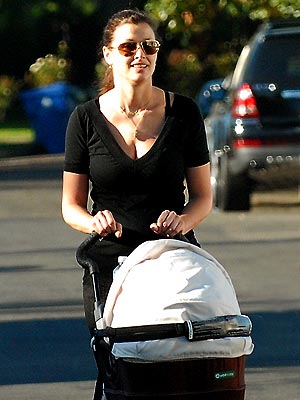 Brand new mama Bridget Moynahan was spotted taking out her 2-week-old son for a walk around the block.

Baby Tom Brady, or as he is really known- John Edward Thomas (destined to be a senator, isn’t he?), enjoyed a blissful ride around his Pacific Palisades home on Tuesday.Â  Little does the tyke know that we expect a lot out of him, or at least some drama combined with some football. 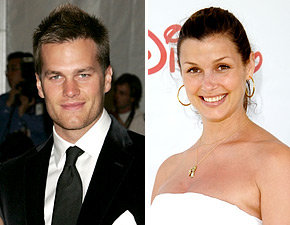 While footballerÂ Tom Brady was mainly absent during the birth of his son by ex-girlfriend Bridget Moynahan,Â he’s now going to be absent in a whole different, more permanent way.Â

A healthy little boy was born to mama Bridget August 22 & she has now named the child John Edward Thomas Moynahan.Â  Notice anything that might be missing?

Time goes by so fast when it’s not you having the baby.Â  Bridget MoynahanÂ has reportedly given birth to Tom Brady’s love child in Los Angeles.

Congrats to the happy family! 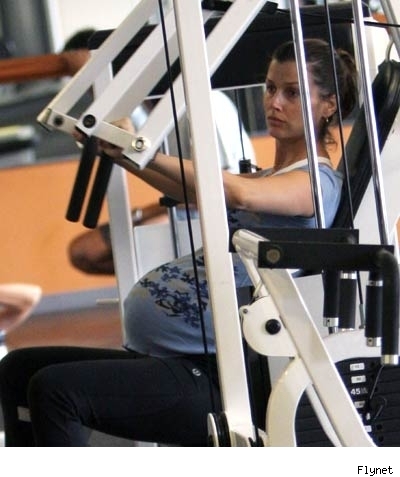 Knocked-up & super pregsÂ Bridget Moynahan was recently spotted at the gym getting those arms of hers ready for lifting her new baby.

Bridg looks ready to pop out Tom Brady’s baby any day now, I’m not even sure she can wait until te due date this Friday.Â  Oddly enough, July 20 is the birthday of Tom’s current lady, Gisele BÃ¼ndchen.

Wonder if Gisele will be there for the birth….

Â Well, it’s all just too bad.Â  I thought a double hitter for Tom Brady would be media fun, but it looks like his current girlfriend Gisele Bundchen is not pregnant after all.

After wildfire rumors over the weekend & even this morning, supermodel Gisele’s rep finally decided to comment on the fact that she was pregnant by the New England Patriot’s quarterback.

According to a spokeman for the Victoria’s Secret model, the pregs rumors are untrue.Â  Which now only leaves Brady’s ex-girlfriend Bridget Moynahan pregnant with a superbaby.

Are you disappointed that Gisele isn’t pregs with Brady’s baby?