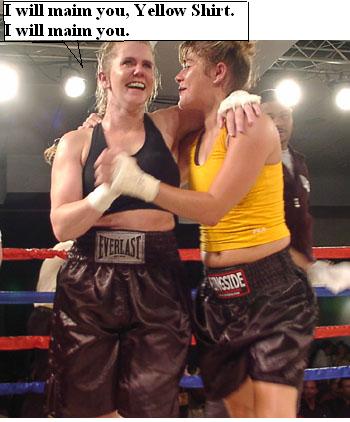 Tonya Harding is in the news yet again, but not for being a hitlady.Â  Tonya’s been multi-tasking and trying on various personalities.Â  From a born-again Christian singer (who never sang a word without getting at least one “boo”), to boxing (yes, I said boxing) to a new series on GSN airing March 12 entitled “Anything to Win“, TonyaÂ has beenÂ a busy bee.Â

From the above paragraph what interests you the most?Â  Was it A– What the hell is a hitlady?Â  Which would of course be the counterpart of the hitman.Â  Was it B- Multi-tasking, and thinking to yourself that you’ve heard that phrase from your boss’s lips too many times?Â  Or was it C- BOXING?!!

Yes, Tonya hung up her dainty little ice skates and donned some fleshy meat to her body and added boxing gloves.Â  She has spent the last few years as a professional boxer and has appeared on the show “Celebrity Boxing” where she pummeled Bill Clinton accuser Paula Jones.Â

Regarding her boxing style, Harding said, “If you knock me down, I don’t care, I’ll get right up (with a long, sharp machete).Â  I’m like the Energizer bunny.Â  Usually the one who talks the loudest is the loser.”Â

Confirming the fact that she is a manipulative beast who waits until you least expectÂ it to strike her decisive and deadly blow to your head.Â

Wow, Tonya Harding boxing.Â  It does kinda fit.Â  Go with what you know, if you’re a batty back-stabbing bitch, release your aggression thruÂ entertaining and legal violence.Â  I guess it’s kinda like if Michael Jackson headed up No Child Left Behind.Â  Sorry, I couldn’t resist that one.