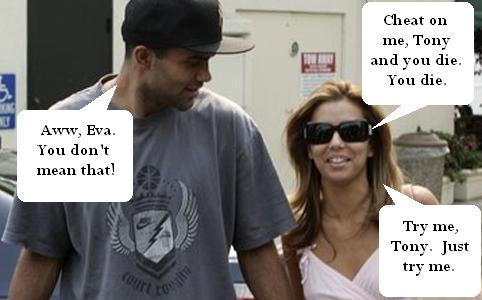 I wasÂ left scratchingÂ my head when Eva Longoria’s rep kinda randomly announced Friday that she & Â beau of two yearsÂ Tony Parker were â€œgoing through a difficult time.”Â  But we can now leave our head-scratching & say ohhhh.

Famous basketballer Tony Parker was spotted dirty dancing with an ex-girlfriend at the NYC club Marquee.Â  Parker was getting it on with the blonde bombshellÂ in front of a lot of celebs.Â  Leonardo DiCaprio, Mick Jagger & Bono all saw the sexual action taking place.

AÂ friend of Longoria’s stated, “Eva was devastated when she found out.”

â€œThe blonde was an ex-girlfriend of Tony’s, and they apparently swapped numbers, but he swears nothing else happened. Eva and Tony are talking right now, trying to work things out.”Â

Through her rep, Eva madeÂ the statement, “My loyalty remains with Tony.”

What she forgot to say after that was, “But myÂ furious revenge remains with the blonde.”