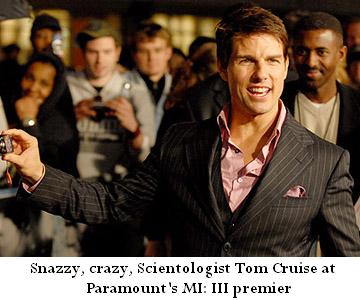 As we allÂ know, stories, likeÂ an open bottle of wine, tend to breathe as the time passes.Â  And so it isÂ with the case of Tom CruiseÂ & his sacking by Paramount.

It looksÂ likeÂ Cruise may have beenÂ dropped by Paramount specifically over his criticism of Brooke Shields’Â use of postpartum antidepressants back in 2005.Â  The wife of 83-year-old Paramount boss Sumner Redstone, 43-year-old Paula Fortunato has a lot of influence upon her husband.

After Fortunato heard Cruise’s bashing of Brooke Shields’ use of antidepressants after giving birth to her daughter Rowan in 2003.Â  The boss’s wife was so enraged after hearing Cruise’s rantings that she warned husband Redstone that the star’s Scientology-inspired comments would be offensive to his female fans.

To refresh, Redstone said last week: “As much as we like him personally, we thought it was wrong to renew his deal. His recent conduct has not been acceptable to Paramount.”

While most are going with the idea that Redstone let the Cruiser go because of his erratic behavior on Oprah, many are pointing to the influence a boss’s wife can have.

Viacom spokesman Carl Folta says, “It is true that Mrs. Redstone disagrees with Tom Cruise’s views, but she and Mr. Redstone see every Paramount film.” Â

Interesting.Â  If only I could influence a boss that Paris Hilton needÂ not apply for another music album project.

To end the day off right, let’s turn to other celebs & see what they’re saying about the Tom Cruise vs Paramount shenanigans.Â
Â
â€œLook at people like Colin Farrell. He acts much more strangely and nobodyâ€™s dumping him.â€Â  Aisha Tyler
Â
â€œItâ€™s so ridiculous. Why would you fire Tom Cruise?â€Â  Debi Mazar
Â
â€œItâ€™s only fair that this should happen to movie stars that pull down $80 million a movie.â€
John Lithgow
Â
“I like that Sumner Redstone just went at him balls-out. That crazy old nutbag will say anything.â€Â  Kathy Griffin
Â
â€œTom is a megastarâ€¦He just had a baby, and that is what he should be focused on.â€
Leah Remini