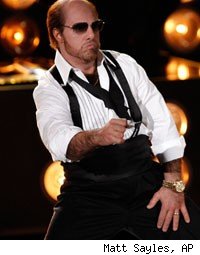 Tom Cruise took a brilliant turn as Les Grossman in Tropic Thunder and then he stole the show with that character at this years MTV Movie Awards, so it should come as no surprise that Grossman is getting his own full length feature film.

The film, a partnership between Paramount and MTV will star Cruise alongside Tropic Thunder co-star Ben Stiller and Stuart Cornfeld of Red Hour Films, with the screenplay being penned by Michael Bacall.

Stiller released a statement about the project:

“Les Grossman’s life story is an inspiring tale of the human class struggle to achieve greatness against all odds. He has assured me he plans to quote ‘F**king kill the sh*t out of this movie and make Citizen f**king Kane look like a piece of crap home movie by the time we are done.’ I am honored to be working with him.”

Adding to the humor of the fictional character Paramount Film Group president, Adam Goodman got in on the act:

“Everything I learned in this business, I’ve learned from Les. I started out as his assistant, and from the first day he threw his desk at me when I got his lunch order wrong, I have loved him like a father.”

Personally I think Les Grossman is one of Cruise’s best characters to date and I can’t wait to see what ends up happening to Grossman in the film.

What do you think about the idea of a full length adaptation?