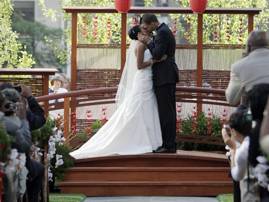 While the ban may no longer exist, it’s still up to producers to pick the winner, which in essence gives them the ability to watch, but not choose gay respondents video applications.

The segment, which has existed for more than a decade receives thousands of applications each year.

According to PopEater, Jarrett Barrios, president of the Gay & Lesbian Alliance Against Defamation said of the decision:

“We’re thrilled that `Today’ show’s ‘Modern Wedding Contest’ now recognizes what most fair-minded Americans have already concluded — a wedding celebrates love and commitment, whether the spouses are straight or gay.”

If you’re unfamiliar with the segment, show viewers choose everything for the wedding from the wedding dress to the cake and flowers used at the ceremony. NBC chooses four couples to compete and viewers vote on the couple they’d like to see have a dream wedding.

Since gay couples can not receive a wedding certificate in New York they had always been banned from the competition, however there was no reason they couldn’t have their ceremony in New York and apply for same-sex rights in another state.

In 2005 Gay and Lesbian couples could apply since the wedding was held out of state. No lesbian or gay couples were chosen for the top four couples at that time.