.
You are here: Home / What's In the Theatre / Thumbs Down for Meryl Streep & Kevin Kline Play 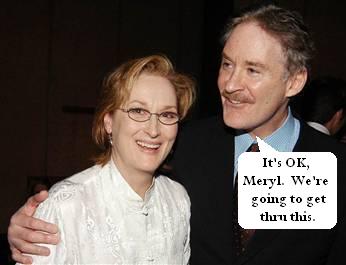 Earlier this week fans got a sneak preview of the play starringÂ Meryl Streep & Kevin Kline & they didn’t likeÂ what they peeked.Â  Despite many patrons waiting in line for hours to see theÂ show, some became so bored duringÂ the long production they simply walked out.Â  Ouch, that’s gotta sting a bit.Â

The New York Post reports that around 100 members of the 1,892-strong audience left early, with one member saying, “Meryl is brilliant, but the play itself is boring, tortuous–it needs judicious cutting.

“A number of people left after 20 minutes. Many didn’t return after intermission and then, three hours in, during a long song by Kevin Kline, they were pouring out.”

Arlee Kriv, the show’sÂ publicist,Â was indignant of any cuts, saying, “The show is what it is–a long show.”

Kline took over the role of The Cook from Christopher Walken, who dropped out last month because he was able to recognize a sinking ship when he saw one.