.
You are here: Home / Celeb news / The Top 10 Most Incredible Celebrity Wedding Dresses

Celebrity weddings are all about haute couture and the A-list, extravagant destinations and even more outrageous price tags, but everyone knows that a wedding is nothing without a breathtaking bride, and when she walks down the aisle, all eyes will be on her dress. Here’s our list of ten celebrity brides who took glamour to the next level. 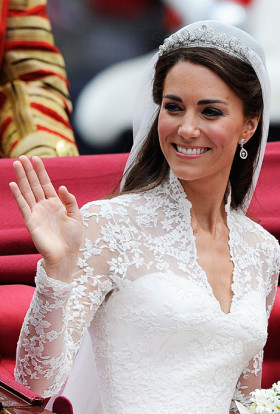 When she stood on the arm of Prince William, with over 2 billion people watching, she was as elegant and effortless as a woman born to royalty. As Duchess of Cambridge, she stunned in a lavish dress of English and French Chantilly lace. The dress was designed by Sarah Burton of Alexander McQueen’s design house, and Kate selected a pair of McQueen shoes to take her look to the heights of excellence.

When she married Gavin Rossdale of the alt-rock band Bush, Gwen wore the wedding gown her own way–dipped in pink. Her Christian Dior design drew sighs of rocker-chick envy from her fans, who would go on to dye the tips of their hair as pink as the bottom of her silk faille dress. 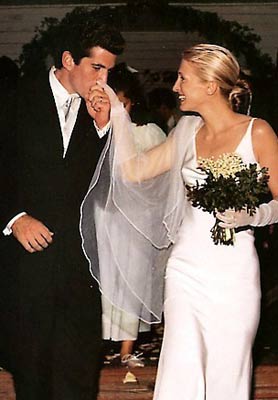 You’ve got to step-up your game if you’re marrying a Kennedy, and that’s just what Carolyn Bessette did when she walked down the aisle in pace with John F. Kennedy Jr. in 1996. Her gown was so simple, so beautiful, and so becoming of her that it launched its designer’s career, and turned Bessette into an icon of fashion just like Jackie O.

No list of bridal gowns could be complete without the timeless classic suit of brown wool that Monroe wore to her San Francisco City Hall marriage to Joe DiMaggio, proving yet again that in order to be an unforgettable beauty, a bride requires neither a traditional dress, nor the color white. 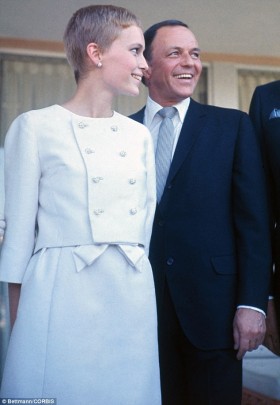 When she married Frank Sinatra at the fresh-faced age of 21, she too eschewed the traditional wedding dress and long flowing veil, opting instead to maintain her close crop, and let the style of the day dictate her attire–a mini-dress with a square cut jacket, of course.

It’s hard to imagine style icon, Audrey Hepburn looking anything less than perfect, but as a bride she was spectacular. In a Balmain with chiffon sleeves, she looked youthful and innocent, and accessorizing with a headdress of flowers showed she could accessorize ahead of her time.

She married Mick Jagger. She wore a smoking jacket, and enormous sun-hat swaddled in veil, and a long white skirt to the party. She didn’t care that her wedding wasn’t being held at an elegant location. That’s how you score a rock-star. That’s what cool looks like.

Last, but by no means least, Grace Kelly’s wedding gown stopped hearts and dropped jaws when she wore it in 1956. Perhaps one of the most glamorous gowns of all, studded with pearls, and long sleeved, made of silk tulle and silk faille, her dress looked like it belonged in a dream, and that might be because it was actually conceived by a costume designer. It’s unmistakable shape, slender at the waist, extended at the hips for exaggerated curves, took forty-two seamstresses 6 weeks to perfect.