.
You are here: Home / Celebrities / “The Situation” Gets A Truly Inspired Birthday Cake 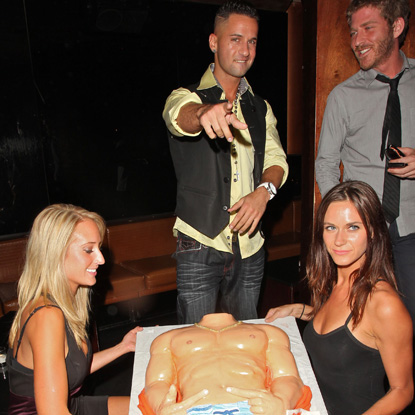 The Situation loves his abs…a whole lot! To prove his own obsession his friends delivered him a birthday cake in the shape of his abs for his 28th birthday part in New York City on Tuesday night.

If you’re unfamiliar with the Jersey Shore, Mike “The Situation” Sorrentino received his nickname when he pulled up his shirt revealing his 6 pack abs, to which he responded “this is the Situation.”

The case is tanned and ripped, it’s like an edible juice head, but probably about 100 IQ points smarter than the entire case combined.

The Situation received the cake at NYC hotspot Tenjune.