.
You are here: Home / Deaths / ‘The Jeffersons’ Franklin Cover is Truly Moving on Up 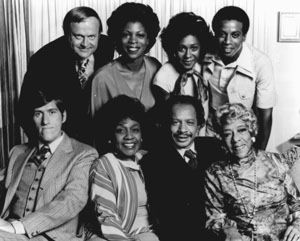 Franklin Cover (November 20, 1928 – February 5, 2006), who became a familiar face as George & Louise Jefferson’s white neighbor in The Jeffersons, died of pneumonia Sunday.Â  He was 77.Â

Cover was born in Cleveland, Ohio in 1928.Â  He began his career on stage in productions of Shakespeare’s “Hamlet” & “Henry IV“, and later in many Broadway plays. He made his television debut on Naked City & later appeared on The Jackie Gleason Show.

He was best known, however, for his role as Tom Willis in the long-running sitcom The Jeffersons. His character was one half of one of the first interracial marriages to be seen in primetime television.Â  The show ran from 1975 to 1985.

Following the end of The Jeffersons, Cover continued to make guest apperances on television shows and played a supportive role in the 1987 movie Wall Street.Â  His final appearance was in an episode of Will & Grace in 1999.

He is survived by his wife Mary, and a son & daughter.

I’ll leave you with these familiar words: