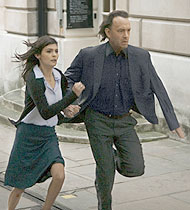 I know exactly what I’m doing May 19, and it’s not scrubbing the floors. The Da Vinci Code, a Ron Howard directed movie, is set to hit screens this coming May. From the man who directed Willow, Apollo 13 & A Beautiful Mind– I trust the director to do justice to the Dan Brown novel.

Tom Hanks is taking the lead as Robert Langdon & his counterpart will be played by the lovely French actress Audrey Tautou, who won fans and smiles alike in Amelie. The spirited actor Sir Ian McKellen will be playing the role of fitful Sir Leigh Teabing. With such a talent-ridden cast & fun book, I think anyone could direct this baby and make it sing.

The basic plot line of “The Da Vinci Code” fiction book surrounds a murder in the Louvre and clues in Da Vinci paintings lead to the discovery of a religious mystery protected by a secret society for two thousand years — which could shake the foundations of Christianity.

The trailer is now available for your viewing pleasure, with no spoils attached. There is some spoiling, however, for the author Dan Brown who has been involved in a lawsuit for the majority of this year. Two writers have stepped forward accusing Brown of stealing their ideas. Well, at least he didn’t call it a memoir.