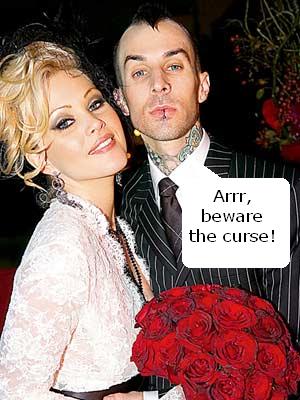 Adding to theÂ ongoing list of celebrity couplesÂ who have fallen prey to the curse of MTV, rocker Travis Barker & wife Playboy Playmate Shanna Moakler are ending their marriage after only two years.Â  The stars of Meet the Barkers are third in a recent line of MTV star breakups.

The new split comes just four weeks after Dave Navarro & Carmen Electra came out with the news bulletin that they were “amicably separating”.Â  Navarro & Electra chronicled their 2004 nuptials in the ‘Till Death Do Us Part series.Â  And just eight months after Jessica Simpson & Nick Lachey announced their official separation.

Barker’s publicist stated, “I can confirm that Travis filed this morning.” The publicist also confirmed the filing when contacted by Reuters.

Moakler’s eyes were on his children saying, “My only concern right now is for the welfare and best interests of my children.”

I’m thinking this new pirate movie could work:Â  Pirates of the Hollywood Hills:Â  The Curse of MTV.