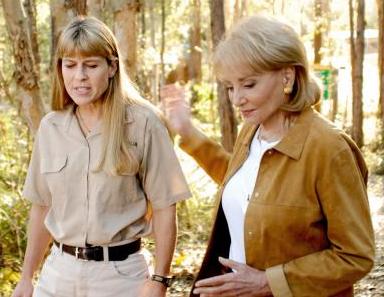 Millions watched as Terri tried to hold back tear through the entire interview.Â  Mrs.Â  Irwin spoke on everything from her son Bob’s pining for his father to her eight-year-old daughter Bindi’s strength & understanding.

Terri said it wrecked her heart to have to tell herÂ two-year-old son Bob that his daddy had died.Â  Bob cried and cried and couldn’t stop pining for his famous father.

“He cried for his Daddy,” Terri said, holding back the tears.

Despite her husband’s shocking death from a stingray barb earlier this month, Terri said she has no fears for Bindi or Bob if they choose to follow in Steve’s footsteps as “wildlife warriors.”

Terri stated that the two young children were “blessed” to grow up in a zoo and have a strong love for animals.

“My fears are any fears any mother has,” Terri said.

“I have a wonderful gift that my children are growing up in a zoo and instead of them hating and fearing wildlife, they embrace it.”

Terri relived how she broke the tragic news to Bindi & Bob that their father had died.

“I told Bindi ‘In life you steel yourself for things that go wrong’,” Terri revealed, holding back those enormous tears.

“And I said ‘When something goes wrong you have to have faith and you have to believe it can be a new chapter and that we can go on’.

“And I said ‘We are still a family. Daddy still loves you and we have to stay together and get each other through this’.”

Terri & her children were on a trekking holiday in Tasmania on September 4 when her brother-in-law called with the life-alerting news that Steve had died.

“Robert asked me twice what happened and I explained it to him. It took him longer to get his mind around it.

Terri said Bob recently took a screwdriver out of a tools drawer and said he was off to fix the family motorbike.

“Off he goes, very carefully carrying it like it was a lit candle,” she said. “Goes up to the motorbike and starts poking at it. I said, ‘What are you doing to the motorbike?’ He said, ‘I’m fixing the motorbike so daddy can drive it from heaven.’ ”

Gush, gush.Â  I don’t think I’ll be able to hold back those tears.

The world stood still last week as eight-year-old Bindi spoke at her father’s memorial service at Australia Zoo’s Crocoseum last week.Â  She never shed a tear, a very strong little girl they have brought up.

Walters, who was at the memorial service admired how calmly Bindi has spoken & asked Terri if she had truly understood that her father was gone.

“She always understood because living at a zoo, animals die.

“She has seen death. She knows what death is.

“She said I want to be at the memorial and say something about my Daddy.”

Terri, however, could not speak at the memorial service, the pain being too close to her eyes.

Terri revealed that she still cries all the time, but not in front of Bindi & Bob.

“They’ve seen me cry, but there are times when I weep,” Terri said.

I hope you were able to watch the Barbara Walters interview, it was masterful & beautiful.Â  Our peace & love go out to the Irwin family.