.
You are here: Home / Celebrities / Taylor Momsen Jokes About Sex With A Priest, Shows Off Her White Trash Status 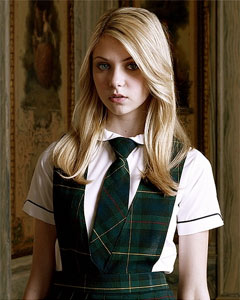 Taylor Momsen is just 17 years old, but that hasn’t stopped her from joking about having sex with a priest.

The joke came while Momsen was on a radio show in New Zealand and comes shortly after a photo was leaked in which she had a tampon string malfunction.

The 17 year old spoke about sex, Justin Bieber and pretty much anything else she felt like babbling about during the interview/chat session.

She said of the priest encounter:

“I was raised Catholic. I f–ked a priest once,” adding “I’m just kidding.”

She then proceeded to speak about her Tampon malfunction:

I don’t take [any of the stories about me] to heart; I just look at it this way: My f–king tampon’s on the goddamn internet.”

Finally she talked about not knowing who Bieber is, at least in terms of his music:

“I don’t know who Justin Bieber is. I only know his name because it keeps being brought up to me. I listen to Led Zeppelin and The Beatles, so I have no idea who he is. That’s not a dis; I just don’t know.”

I love this girl, her and Lindsay Lohan should become besties, then they can eventually share a cell together once Momsen starts clubbing and driving drunk….I give her a year…maybe two.