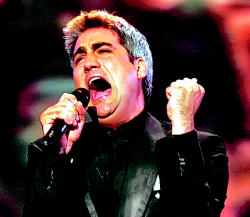 Hicks charmed audiences from the beginning of the fifth season of American Idol with his raw bluesy singing and his I-don’t-care-what-you-think dancing.Â Â Over 200 million people worldwideÂ watchedÂ the two-hour finale Wednesday & 63.4 million votes were cast- now making American Idol more interesting to the public than presidential elections & Stephen King.

The Birmingham, Alabama singer shouted ‘Soul Patrol’ after his victory was announced over McPhee.Â  Hicks’ win was not without expectation, as he had never been in the bottom three picks until there were only three left & on Tuesday judge Simon Cowell predicted his win.Â  And I believe it’s Simon, Stephen, that truly has the strange powers here.Â

The elaborate & star-studded show featured a surprise performance by Prince & last season’s Idol winner Carrie Underwood. The final five Idols each performed a solo with many being accompanied by famous singers – Paris Bennett sang with the legendary Al Jarreau & Hicks performed an entertaining “In the Ghetto” with Toni Braxton.

Chris Daughtry sang with band Live whileÂ McPhee joined Meatloaf for a tune on his new album- somehow that pairing makes a lot of sense.Â  Mary J. Blige made an appearance with Elliot Yamin & performed her song “One”.Â  Yamin was introduced by his mother who won a Golden Idol for the ‘Proudest Parental Moment’.Â  Other Golden Idols were handed out with sarcasm to the worst of the early Idols.Â

In a cute segment, Kellie Pickler who has become known for her inability to pronounce the words ‘calamari’ & ‘salmon‘ correctly was featured with celebrity chef Wolfgang Puck who tried to educate the poor dear on hew foods & pronunciation techniques.Â

All in all, it was a fabulous end to the fifth season.Â  Now if we can just get t-shirts made with ‘Soul Patrol’ we’re good to go.