Yesterday I raved about the best-dressed women at the Screen Actors Guild Awards. Now it’s the guys’ turn. I know there’s nothing much they can don other than ties and tuxedos, but there are a few stylish men who add the extra oomph to an otherwise conventional suit.

He may have tried to act goofy for this photo op, but Eli Roth (whose movie Inglorious Basterds won Outstanding Performance by a Cast in a Motion Picture)’s plaid suit made him more hottie than funny.

Justin Timberlake never fails to disappoint at the red carpet. His Dolce & Gabbana ensemble was a crowd favorite at last Saturday’s SAG Awards.

Although head-to-toe black is a safe choice, not many guys can stylishly pull it off the way Kevin Bacon did. The Taking Chance actor also took home the award for Outstanding Performance by a Male Actor in a Television Movie or Miniseries.

I’m getting quite tired of the predictable jewel tones and monochrome gowns that the stars usually wear to awards shows and red carpet events. For last Saturday’s SAG Awards, my picks for best dressed were the stars who donned prints and beads.

True Blood’s Anna Paquin strayed away from the dark side with her printed Alexander McQueen dress.

Although I love Meryl Streep’s belted printed gown, I’d do without those sunglasses.

Sandra Bullock not only won Outstanding Performance by a Female Actor in a Leading Role for The Blind Side, but also got the fashion police’s nod in this black and blue-trimmed Alexander McQueen gown.

See the complete list of winners and highlights of the 2010 SAG Awards here. 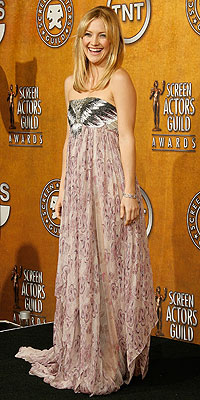 Man, we missed this! The writers’ strike put a damper the usual round of January awards shows (and red carpet sightings). But the SAG — the only show that got the approval of the Writer’s Guild — lifted the ban, and had stars blowing the dust off their fabulous gowns.

Here’s the best dressed of the bunch. 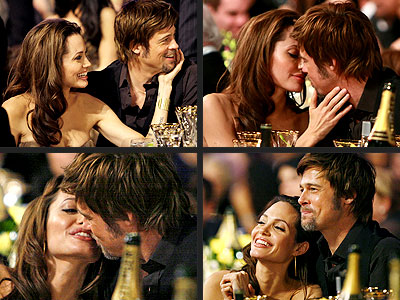 Brad Pitt and Angelina Jolie just couldn’t keep eyes, hands or lips off each other at the Screen Actors Guild Awards. (Even when all the other actors said it was a great show.)

Oh, it’s nice to know you guys are still in love, but you’d think ata rate of $20 million a movie, the two could afford to get a room.