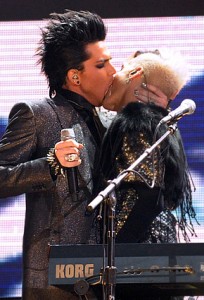 The keyboard player that Adam Lambert kissed on stage is straight, but according to Adam, he didn’t mind the kiss. After all, it was all for entertainment’s sake. It was not planned, but maybe it was hinted during rehearsal. He hasn’t said anything about the issue, though. Maybe he liked it?