END_OF_DOCUMENT_TOKEN_TO_BE_REPLACED

That didn’t take long. R&B Singer Chris Brown has officially apologized for freaking out on the set of Good Morning America a tantrum that led the singer to smash a large window when asked about his past relationship with Rihanna.

Brown appeared on the show to promote his new album F.A.M.E. however he became angered when show host Robin Roberts almost refused to talk about anything other than his past abusive relationship with Rihanna.

“This album is what I want them to talk about, not what happened two years ago.”

After leaving the interview, Brown, who just finished an anger management class “flew into a rage” according to an insider, throwing a chair through a window, which thankfully did not hurt anyone below. GMA staffers were so worried about his actions that they reportedly called security.

Brown talked about his tantrum on BET’s 106 & Park Wednesday:

END_OF_DOCUMENT_TOKEN_TO_BE_REPLACED

On Tuesday morning Chris Brown was appearing on the set of Good Morning America when he reportedly went crazy and started screaming before breaking a studio window.

Apparently Brown became enraged when host Robin Roberts started bringing up his 2009 attack on then girlfriend Rihanna. When Brown tried to redirect the questions and Roberts refused to budge he said:

“I think I’m past that in my life,” at which point he started talking about his album F.A.M.E. which he says “Fans Are My Everything.” finally adding “I’m just focusing on this album. This album is what I want to talk about.”

Robyn then stuck to her guns and asked another Rihanna situation question.

“We’re told after the interview, Brown freaked out, storming into his dressing room and screaming so loud, the people in hair and makeup became alarmed and called security,” said TMZ.com while adding, “We’re told Brown was out of control, and one source present tells us he smashed a window in his dressing room, and the glass shattered and some shards fell onto 43rd and Broadway.”

“I’m so over people bringing this past shit up!!! Yet we praise Charlie sheen and other celebs for there bullshit.”

One difference Chris, those other celebrities don’t sing love songs then beat up the girl their dating. Also, what happened to that anger management course you completed in December? Even if you did complete your class, breaking a window shows how deep seeded your “crazy” issues really are. 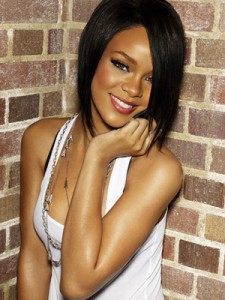 In several months, it will have been a year since Chris Brown beat up Rihanna, and it is only now that the female singer will be breaking her silence about the whole thing. In the meanwhile, Chris Brown has been sentenced to community service, Rihanna has been churning out hits. Tune in to Good Morning America this Friday to hear what she has to say!