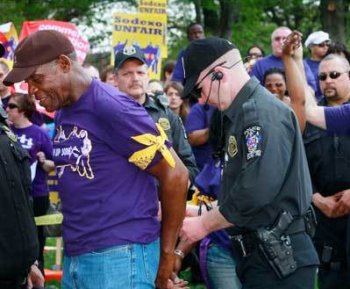 Danny Glover was arrested earlier today at a protest outside the offices of Sodexo, Inc. in Gaithersburg, Maryland.

… where protesters were rallying against the business practices of the food management giant.

He was given a citation and later released, telling cameras, “We’re moving to make some real positive changes.”

The arrests were part of a nationwide protest against the company in the US by the Service Employees International Union (SEIU). The protests are being held in response to what union reps say has been a brutal backlash against Sodexo employees who are trying to unionize.

The crowd cheered as Danny Glover and 11 other people, including SEIU President Andrew Stern, who announced he will be stepping down from his post after 14 years earlier this week, were arrested and led away in handcuffs.