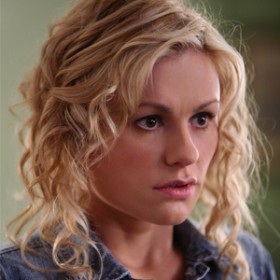 Anna Paquin, star of the True Blood series back in April revealed that she loves the ladies…and guys (she’s engaged to be married to Stephen Moyer).

Apparently that bisexual announcement has had the general media all up in a arms, which got Paquin talking in Self magazine.
During her interview she told Self:

“I’m a very private person, but everyone who is in my life who matters to me always knows what’s going on. I understand why it’s a big deal to some people, but to me, it’s not. I’ve probably always known I was bisexual. I’m really lucky; I grew up in an open-minded, supportive family, so my sexuality was never stigmatized or scary or out of bounds. I’m comfortable with who I am, and it’s not an issue.”