We’re all powering up for the Rio Olympics, and gymnastics, track and field, and swimming are all over the news. But in all the lead-up one sport we haven’t heard much about is archery. Still, the low profile of this ancient sport hasn’t kept these celebrities away; many have mastered the skill, and not just to play roles like Emma Woodhouse or Andromeda. No, these stars are on target all the time. END_OF_DOCUMENT_TOKEN_TO_BE_REPLACED

Inside Miley Cyrus, there’s a big girl waiting to get out. But can someone please tell her she’s not a big girl just yet? She’s not even legal for a few more months, yet last year she did a lapdance for producer Adam Shankman a (gay) 44 year-old man, and earlier this year she did a photo shoot in a corset. Now she’s performing for kids in skimpy outfits (a olive-colored one-piece leotard/ bustier/ bathing suit with “nude” leggings and black high-heel “come-eff-me-boots”) and rubbing her hand suggestively along her hip and thigh.

Now, it’s understandable that she doesn’t get the TV show Glee, and can’t “suspend her disbelief,” despite her background, but how does she not get that she’s behaving inappropriately? As far as I can tell, daddy Billy Ray Cyrus has don’t anything mean to his daughter, so she’s not a head case like some of her elder sister celebs.

So what’s going on with all these “dress up” games? And how come she’s saying that she’s not a fan of pop music? Isn’t that what she’s all about? Well apparently not, as her Can’t Be Tamed video, off her upcoming album of the same name, shows. In it, she’s wear a black one-piece, looks kind of like a goth-y Mary Kate or Ashley Olsen. Oh wait, she’s some mythical creature, the Avis Cyrus (?), and she has large black wings. And according to the lyrics, she “goes through guys like money.”

Hmm, yes. Maybe she and Avril Lavigne can compare notes about how tough they are. But at least Avril’s of age. I really find it hard to buy this new pop-punk Miley at the (maybe not so) tender age of 17. Then again, how many other “sweet” little lala land girls went on to be Monster Sluts successful adult entertainers? I’ve lost count. 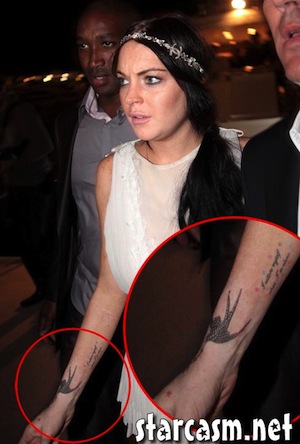 A lot more celebs have tattoos than many of us might have guessed, but the latest bunch of misfits to get some ink done are Lindsay Lohan and Britney Spears. Lindsay had a swallow (above; pic: Starcasm.net) inked on the less fleshy part of her right forearm (i.e., probably somewhat painful). The swallow is said to be similar to the one for the Chanel logo.

Well at least LiLo’s tat isn’t too stupid. Brtiney, on the other hand, supposedly paid $5K for a red crown — as in what a queen would wear on her head, except Brit got it inked on her butt cheek. For $5,000. No pics have surfaced yet of this ridiculous waste of money. (I think I need to move to Lala land and take up a new profession.) Maybe she’ll tweet a pic to her followers on Twitter. After all, she’s about to have the most followed Twitter profile, about to beat out Ashton Kutcher.

Miley Cyrus has what seems like an innocuous tat, with the word ‘love’, but it it’s on her right ear. Considering the actual location, which is not very fleshy, it was probably a painful inking to sit through. That still doesn’t make her a big girl now, and hopefully she saves the bump-and-grinding of older men until she’s at least of age. 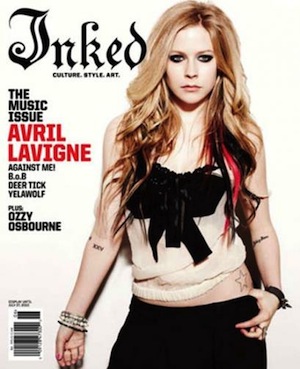 Avril Lavigne might be a bit tougher than I’ve given her credit for. She’s on the cover Inked magazine and apparently she has the four-letter word “F*CK” on her rib cage. Not sure how long she’s had it, but it’s the full word, not the censored version. As in forever. Until she dies. Unless she gets painful laser surgery to remove it. Yeah, that’s really the kind of girl you want to take home to mom. Who knew Canadian chicks could get so tough, swearing like a sailor, eating Tim Horton’s donuts and playing in the snow all year. Maybe Lindsay and Avril can have another fight, this time over who has the stupider tattoo. Wonder what they’ll tell their respective grandchildren.

Wow these are tough starchicks. Ryan Phillippe is a bit of a softie in comparison. He has a tat of his son and his grandfather, as a symbolic gesture, since the two never met. Aw.

Ha ha ha ha. That’s rich. Avril Lavigne has a problem with false people? That’s apparently what she told Lindsay Lohan when LiLo tried to talk to the scrappy punk poser at the Chateau Marmont in Hollywood. (Does Lavigne think she’s a punk rocker and not a pop sellout, just because she gets into scraps with other people?) There was apparently a lot of yelling and some threats from a hurt and embarrassed LiLo to get Lavvy booted out, but security treated LiLo like a buzzing fly, after which she huffed off.

My money on a real scrap between Lavigne and Lohan would be LiLo, but the latter has probably had her confidence shaken a lot lately. Now that’s something I’d pay real money for: a WWE-style street fight with no rules, no holds barred between LiLo and Lavvy. Since LiLo’s acting career seems a bust right now, other than her rumored playing of porn star Linda Lovelace in the indie flick Inferno, she might consider a career change to wrassling. Anybody have Vince McMahon’s phone number? Then again, if the Celebrity Death Match clip, below, of Lindsay Lohan vs Hilary Duff is any indication of LiLo’s skills, Vince might not return her calls.

That lucky girl Avril Lavigne had tea with the Mad Hatter, chased after the Cheshire Cat, got lost in the forest with Tweedledee and Tweedledum, and met The White Queen. Her song “Alice” is the main single of the Alice In Wonderland soundtrack, and the official music video is finally out. See how they transformed Avril into the main character for the rockin’ video.

The movie will be out on March 5, while the soundtrack will be on sale on March 2. Other than the 25-year-old Canadian singer, other artists featured on the soundtrack are the All-American Rejects, Franz Ferdinand, and All Time Low.