END_OF_DOCUMENT_TOKEN_TO_BE_REPLACED

While the Shrek series of movies may be done, that doesn’t mean we were never going to see characters from the popular series again and now we have a first look at Puss in Boots, a spinoff from last years blockbuster Shrek Ever After movie.

MSN grabbed a first look at the movie which features the feline voiced by Antonio Banderas. In true Puss In Boots fashion he can be seen wowing the ladies with his swordplay, riding a horse standing up and using stunning moves to show off his prowess.

Unfortunately this first look trailer doesn’t really tell us a whole bunch about the storyline for the upcoming movie. What we do know is that Humpty Dumpty  (voiced by Zach Galifianakis)  teams up with Puss In Boots to steal the goose that lays the golden eggs.

Also featured in the movie is Salma Hayek  who voices Kitty Softpaws. 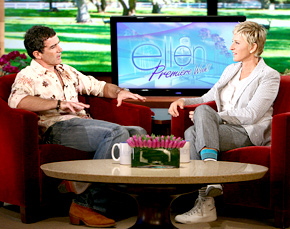 Melanie Griffith’s checking into rehab (again) made the news recently but it did not really have much staying power. In the middle of this week, though, husband Antonio Banderas shed some light on his wife’s move. He says that she checked herself into rehab because she has been taking medication due to a skiing accident. She is afraid that she might not be able to deal with it properly, hence her decision. The whole family is behind her 100%. Good on them!