END_OF_DOCUMENT_TOKEN_TO_BE_REPLACED

The Ivy League university will bestow its Hasty Pudding Woman of the Year award on the 27-year-old actress at a parade and ceremony on January 28, Reuters reported.

Harvard’s Hasty Pudding Theatricals is America’s oldest undergraduate drama troupe, and they have recognized Anne for “ her contribution to entertainment.”

According to The Harvard Crimson student newspaper, she was chosen because of the variety roles she played onscreen and on the stage. Anne’s bustling resume includes The Princess Diaries (2001), Ella Enchanted (2004), Brokeback Mountain (2005), The Devil Wears Prada (2006), Bride Wars (2009), and the upcoming Alice in Wonderland.

Past Woman of the Year awardees include: Renee Zellweger, Halle Berry, Susan Sarandon, Ella Fitzgerald and Lauren Bacall. The award was first given in 1951 to English actress and comedian Gertrude Lawrence.

The law has finally caught up with Anne Hathaway’s criminal ex-boyfriend.

Raffaello Follieri was sentenced to four and half years in prison as a result for pleading guilty to 14 counts of wire fraud, money laundering, and conspiracy.

I wonder how many inmates will make Raffaello their bitch. 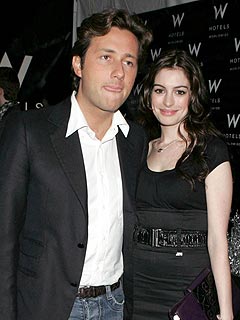 Oh, Anne, you could do so much better.

Anne Hathaway’s boyfriend of the past four years, Italian property developer Raffaelo Follieri, was caught trying to pass a bad check for $250,000 to a public relations firm.

Last year, he supposedly squandered $1.3 million in business funds on cars, clothes, and other luxe goods.

Anne has gushed about how Raffaelo had helped her out of a rut. “Before I met him, I wasted so much time. I was just annoying and narcissistic and smelled bad. He’s protective without being possessive, passionate without needing to show his temper.”