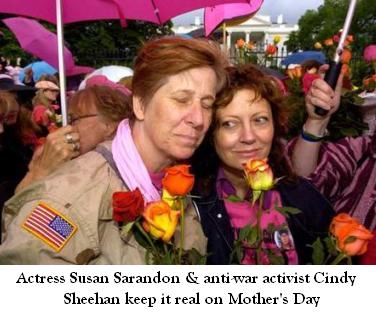 Actress Susan Sarandon gave up the traditional Mother’s Day celebration and instead joined anti-war activist Cindy Sheehan for a protest in Lafayette Park across from the White House.Â

“I can’t think of a better way to spend my mothers day,” Sarandon told reporters before taking the stage.Â

Code Pink, a women’s anti-war group, organized the 24-hour vigilÂ & anti-war protest.Â  Sarandon joined Sheehan onstage at the end of the vigil.Â  Susan read aloud two letters addressed to first lady Laura Bush, one she wrote herself and another penned by a woman from Oregon.Â  Sarandon also brought a copy of the popular board game ‘Risk’ to be sent to Mrs. Bush along with the letters.Â  You know, so she could have something entertaining to do if the letters were pretty boring.Â

Sarandon’s letter urged the first lady to press her husband to personally notify some mothers whose children died while serving in Iraq.

“Those moms praying as they wait for the phone to ring and they hear the voice of their child serving in Iraq,” Sarandon said to a crowd of perhaps 200 people. “Let him be the one to tell them that this week the call will not be coming.”