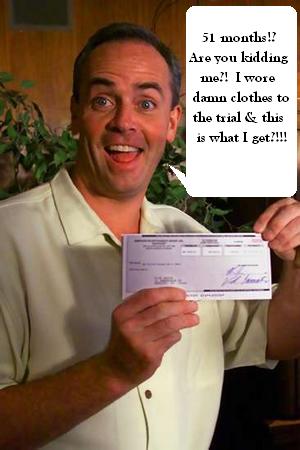 So, it’s going to be a different brand of surviving when Survivor winner Richard Hatch, or asÂ Letterman calls him, ‘the fat, naked guy’,Â enters jail for his 51-month term.Â  Hatch, who won $1 million in the debut season of the show, was sentenced Tuesday for failing to pay taxes.Â  Oops!
Â
The 45-year-old Hatch was convicted in January of failing to pay income tax on his reality TV prize monies as well as other unidentifiedÂ earnings.

The charges against Richard Hatch carried up to 13 years in prison.Â  WhenÂ he was convicted in January UD DistrictÂ Judge Ernest Torres said he expected to sentence himÂ somewhere between 33Â & 41 months.Â  After the sentencing Torres stated that he issued a harsher sentence because Hatch had committed perjury repeatedly through the trial and that Hatch never gave him a chance before voting him off the island.

Hatch made his won statement before receiving his sentencing, “I believe I’ve been completely truthful and completely forthcoming throughout the entire process.”

Hatch’s defense during the trial was that he thought Survivor’s producers would be paying his taxesÂ & pleaded ignorance about money matters, stating that he forgot to tell his accountants about some income.Â  Â

Hmmm, I don’t think Richard Hatch is a big enough celebrity to go with that approach, he’s no Pete Doherty.Â  Should have been straight up at the front, received a 12 month sentence then signed a contract for a ‘Surviving Jail with Richard Hatch’ reality TV special series.