.
You are here: Home / Career Moves / Steve Irwin Death Footage May Be Broadcast 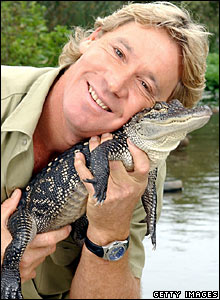 The footage of the CrocodileÂ Hunter Steve Irwin’s death may beÂ broadcast on TV.Â  The charismatic Australian naturalist died Monday after receiving a poisonous stingray barb to the chest while diving off the Great Barrier Reef.

Steve was filming for a new documentary he was working on with his eight-year-old daughter Bindi.Â  While snorkeling & filming,Â a stingray felt nervous between a too-close cameraman and Irwin and released its poisonous barbed tailÂ on Steve.Â  The cameraman was still shooting when the barb went through Irwin’s heart, when he pulled out the barb as well as when Steve lost consciousness forever.

The tapes are still being held by Queensland police, but Irwin’s family is determined to respect Steve’s last wishes and allow the footage to be broadcast.

Irwin onceÂ stated, “My number one rule is to keep that camera rolling. Even if it’s shaky or slightly out of focus, I don’t give a rip.

“Even if a big old alligator is chewing me up I want to go down and go, ‘Crikey!’ just before I die. That would be the ultimate for me.”

An source reported, “This is exactly what Steve would have wanted. He knew the dangers and was totally up for the cameras to get everything.”

I guess, all-in-all, it makes sense for Steve to go out on TV.Â  It seems fitting for his exuberant, unrelenting way of life, the poor loon.