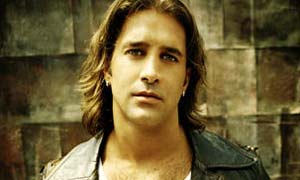 En route to his Hawaiian honeymoon this past Saturday, he was stopped from boarding a plane at Los Angeles International Airport after airline personnel deemed the Creedsman “antagonistic” and “boisterous”.Â  Ummm…. doesn’t that depict about every rocker out there?

A spokesman for the airport police, Lieutenant Tyrone Stallings, said that Stapp was arrested on suspicion of being drunk in a public place and taken to Van Nuys station for processing.Â  Well,Â just think of it as extra wedding pictures at the police station.

Stapp apparently demanded a blood-alcohol test and registered at twice the legal limit.Â  Oops, maybe not such a good idea when you’ve had 3 bottles of champagne.

There was no immediate comment from his publicist regarding his arrest or “antagonistic & “boisterous” behavior.

It makes for a good story to tell the kids I suppose.Â  Looks like if you didn’t shoot your hunting partner or get married & get arrested this past Saturday, you didn’t do much.