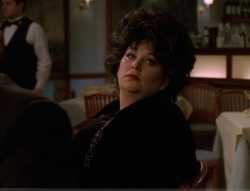 Denis Borino-Quinn, the woman behind Johnny Sack’s wife, Ginny Sacramoni, on HBO’s run away hit Soprano’s died on Wednesday, she was only 46.

Borino-Quinn had been suffering from cancer and passed away at Morristown Memorial Hospital in New Jersey.

Before being part of a criminal crew on television, Borino-Quinn was a legal secretary and part-time manicurist in New Jersey.

But her lucky day came when she was plucked from obscurity and selected from 14,000 actresses in an open casting call for The Sopranos.

Our condolences to her family and friends.