.
You are here: Home / New Releases / Sharon Stone is a Sexy Old Lady & ‘Basic Instinct 2’ is a Silly Old Film 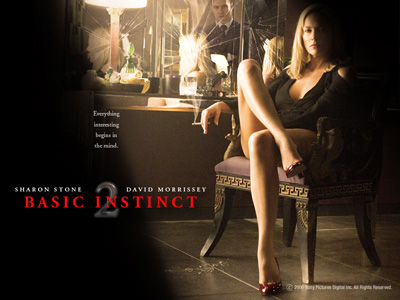 Well folks, when RottenTomatoes gives a film the ‘ROTTEN’ rating, you have to believe it’s true- but that did not stop me from seeing Michael Caton-Jones’s Basic Instinct 2Â in the theatre this weekend, though it should have.

The sequel to the long-loved 1992 Basic Instinct that starred Michael Douglas and Sharon Stone, failed to live up to the original film’s clarity and left the audience soft and wanting more.Â  Pulp author Catherine Tramell (Sharon Stone) is once again a suspect in a murder, this time in London.Â  David Morrissey, whoÂ plays the leading man Dr. Michael Glass, is called in to interrogate the femme fatale Stone.Â

To quote Matt Pais from the ‘Chicago Tribune’, “Stone’s physique has resisted sagging but the film droops immediately.”

Despite the film’s disappointment, Stone remains an interesting individual in my eye.Â  In a recent ABC story, Stone is drawn as a sexy, vibrant and brave woman.Â  At 48 years old, Sharon Stone emits a strong sexuality that few women half her age achieve.Â

When asked by reporters she, at the age of 48, would want to appear in Basic Instinct 2 completely naked she stated, “I thought it would be intriguing to do the nudity in a way that is just quite brazen.Â  People are going to have this moment where they think, ‘Oh, she’s not 20 and naked.Â  She’s 40-something and naked and what do I think about that?’Â  Because we’re not used to seeing that in movies.”

The first Basic Instinct was filmed over 14 years ago and was a racy film to hitÂ theaters, but Stone wanted to push the envelope a little bit more this go-round.Â  “I wanted a lot of sex in the sequel, and I wanted more nudity.Â  I was coming from a really kinky place.”Â  Can I come visit this place with you, Sharon?

So, I’ll keep Stone and you can drive the Basic Instinct 2 flop of a film off a cliff and see if it can then cause a rise in our pants.