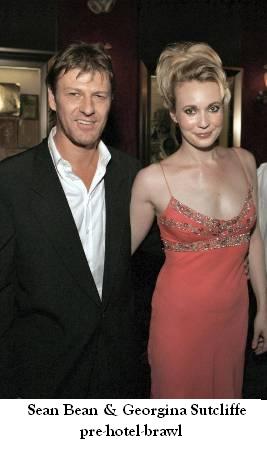 British actor Sean Bean & his girlfriendÂ Georgina Sutcliffe apparently like it rough.Â  The couple reportedly had an alcohol-induced brawl at a California hotel that left both bruised & bleeding.

Security staff found the 28-year-old actress Sutcliffe outside the duo’s $540-a-night Four Seasons Hotel suite with bruises on her face & body as well as bloody scratches on her legs.

Bean walked away from the fight with bloody scratches on his face & arms.Â  Sutcliffe asked the staff not to alert the police, as she was not interested in pressing charges.Â

The incidentÂ was recorded in the hotel’s incident log. It reads: “Ms. Sutcliffe had numerous bruises on her upper body, face and scratches on her legs. Ms. Sutcliffe said she did not want to press charges.”

Hotel security manager Ron Murphy spoke to Bean regardingÂ the fight & noted thatÂ “he had a strong smell of alcohol on his breath and numerous scratches to his face and arms, which were bleeding.”

Guests in neighboring rooms had complained to hotel staff about loud screamingÂ & the sounds of items breaking.Â

The GoldenEye star claims that girlfriend Sutcliffe started to throw things about in a craze and when he asked her to leave she attacked him.Â  When it was pointed out by security staff that he was bleeding, the actor responded, “You’re kidding”.

I’m thinking this guy is no real winner here.Â

Bean & Sutcliffe haveÂ been dating since last summer & they checked into the Beverly Hills Four Seasons Hotel last week while Bean is in filming for a role in the remake of the 1986 classicÂ The Hitcher.Â

The feisty couple were treated for their injuries & Sutcliffe left in a taxi immediately following.