.
You are here: Home / Celebrific Sighting Pictures / Scarlett Johansson & the Curse of the Naked & Nude Ban 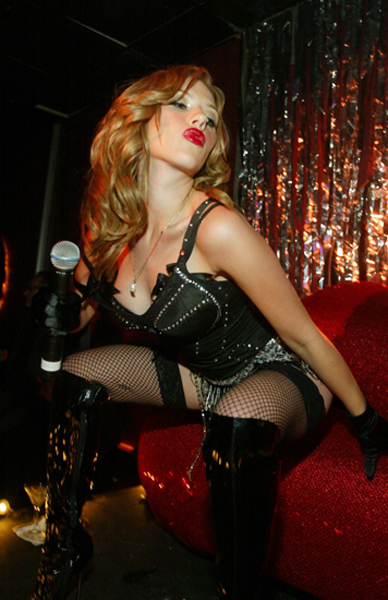 Scarlett Johansson is such a tease, isn’t she?Â  With herÂ plump girly pillows always exposed we’re usually just seconds from lift-off, but we never get the whole naked & nude show.Â  And it might be for good….

Scarlett Johansson is insisting on a no-nudity clause in all her movie contracts. The curvaceous 22-year-old is determined to be seen as a serious actress and now won’t commit to any role without the clause.

A source is quoted by Britain’s Daily Express newspaper as saying: “Scarlett is still very young and is aware the roles she takes are going to set out where her career as an actress takes her in the future. She doesn’t want to fall into being too controversial or too trashy so nude scenes are out for now.”

Wowey wow wow.Â  Now, that is not a good lead-in to a good weekend, now is it?Â  Well, maybe the starlet Scarlett will realize what a good opportunity she is missing by not taking her clothes off for us.Â  Yes, I am sure she will soon come to this conclusion.Â  It only makes sense.