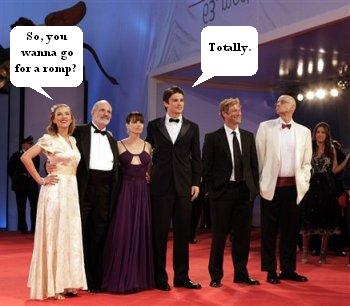 The Black Dahlia opened at the Venice Film Festival last night amid talk that the movie’s sex scene between real-life lovers Scarlett Johansson & Josh Harnett was a little too steamy.Â

TheÂ film concerns a womanÂ (Johansson) caught between two cops (Harnett &Â Aaron Eckhart)Â that are investigating an unsolved murder of an actress in Los Angeles in 1947.

The Black Dahlia features a very sizzling romp with Johansson & Harnett and it looks like movie critics, for some weird reason, are complaining that they found it difficult to concentrate on the film following the hot & heavy sex scene.Â  Well, who wouldn’t?Â  It’s Scarlett for Pete’s sake.

21-year-old Johansson retorted, “Of course it’s nice to be considered sexy, as a young woman in my prime. But I try not to think about the sexiness.

“And I never think about it being distracting from a scene.”

Ahh, the talk of the young, vibrant & sexy always gets me going in the morning.