.
You are here: Home / Mischief & Mayhem / Scarlett Johansson & Josh Harnett Moving In Together 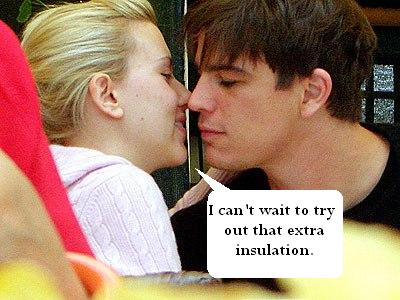 The cat’s out of the bag.Â  Beauty Scarlett Johansson & Josh Harnett are reportedly, officially shaking up.Â Â It looks like the two have purchased a $6 million loft in New York in the coveted Tribeca area.

Despite claims from Hartnett’s publicist that Johansson & Harnett are not moving in together, a real estate insider confirmed that the duo had been hunting for a home in trendy Tribeca.Â  Scarlett,Â her father & Josh were also spottedÂ in a nearby coffee shop discussing floor plans.Â

Apparently the loft purchase comes with a few conditions, the love birds have asked that the bedrooms be soundproofed.Â  Hmmmm, must be for all that tantric sex they have.Â  I wonder what her father made of that piece of info…

Real estate insiderÂ reveals,Â “They asked that we change the design to include extra insulation between the bedrooms of the penthouse and the unit next door.”