.
You are here: Home / Celebrities / George Clooney / Sarah opens up about romance with Clooney 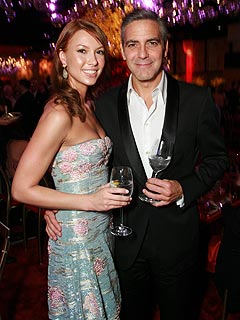 It’s a story you’d expect to see in the movies, not on the front pages of every celebrity magazine. A-list star falls in love with cocktail waitress. Now, George Clooney’s girlfriend Sarah Larson tells how she snagged George Clooney. Apparently, the two met at a party in Las Vegas, where she worked as a cocktail server. She caught his eye, and years later, they met again at the Ocean’s 13 premiere. Within a month they were taking romantic vacations together in Italy.